HOW DO BED BUGS REPRODUCE AND HOW OFTEN?

Stopping the spread of bed bugs can be a difficult task, although new studies on bed bug reproduction are exploring how to reduce the frequency of mating. To understand how bed bugs spread, it is helpful to understand their mating habits.

HOW DO BED BUGS REPRODUCE?

On average, female bed bugs lay about one to seven eggs per day after a blood feeding has taken place. However, the mating process can sometimes be difficult for the female bed bug. Frequent mating can cause injury. As a result, female bed bugs do not necessarily produce more eggs with increased mating sessions. Instead, a female bed bug is more likely to travel away from her original location to an area where she can guarantee a food source and a lack of mates. With lack of disruption and access to food, a female bed bug can lay many eggs.

HOW MANY EGGS CAN A FEMALE BED BUG LAY?

On average, a female bed bug with access to regular meals will lay anywhere from 200 to 250 eggs during her lifetime. Because mating causes scarring, a female that has mated multiple times during a short period will lay fewer eggs than a female who has had time to recover from the reproduction process. The need for females to protect themselves from future mating sessions has helped to increase the spread of bed bugs.

Pregnant female bed bugs are more likely to travel in an attempt to avoid being mated with again. A single pregnant female can cause an infestation of more than 5,000 bed bugs within a six-month period.

Bed bug eggs take approximately six to 17 days to hatch. Hatched eggs are called nymphs. A nymph is not able to reproduce until it has fully matured. The length of time it takes for a nymph to mature depends on temperature. Eggs can hatch and become mature bed begs in as little as 21 days in warmer temperatures. It can take more than four months for the same process to occur in cooler temperatures. Nymphs can begin blood feeding as soon as they hatch. A single female bed bug can mate with any of her offspring after a nymph has fully matured.

A 2010 study conducted by Vincent Harraca from Lund University in Sweden revealed an alarm pheromone released by nymphs, and male bed bugs when approached, to prevent prowling males from attempting to mate. Mature males will attempt to mate with any bed bug that has recently fed. The fact that male mating is non-productive in propagating the bed bug population has inspired scientific research, which resulted in the discovery that immature nymphs and male bed bugs release a fear pheromone to prevent a mating attack. In the future, scientists hope to use this pheromone to reduce mating overall and lessen infestations.

Bad news: Bed bugs like the smell of your dirty laundry

Bed bugs are upsetting for a multitude of reasons. For one, they are tiny, flightless creatures that live only in crevices and holes, but that have somehow managed to spread across almost the entire planet. For another, well…we’ll get there. Let’s start with the colonization.

No one really knows how bed bugs travel. Much like the Black Death, they seem to crop up everywhere without any obvious signs of direct transmission. But this is not the Middle Ages. We are living in a post-germ theory world. So a group of intrepid entomologists at the University of Sheffield embarked on a quest to discover where these critters are hiding in an effort to stop them from infiltrating your mattress. They published their findings in Scientific Reports this week.

As is the case with most journeys, their quest began with clean clothes and ended with dirty ones. See, these scientists had a theory: it’s not just humans that bed bugs are attracted to, it’s the smell of a human. Bed bugs, along with mosquitoes and ticks and plenty of other blood-sucking creatures, find animals to feed on by detecting the carbon dioxide they exhale. Researchers who study these bugs can actually collect wild specimens by leaving a chunk of dry ice (which is just frozen carbon dioxide) out in the woods for an hour or two. When they return, it’s surrounded by vampiric critters. The gas indicates that some living, breathing thing is around packing a fresh supply of blood. 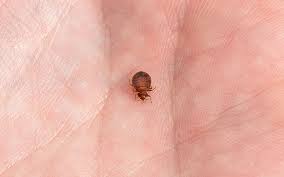 The Clan of the Common Bedbug

Comparison of DNA from Cimex lectularius varieties demonstrates that even though they are all of the same species, their lineages have diverged substantially. Booth and Balvín found 14 different lineages (haplotypes) of Cimex lectularius among their bat-biting subjects and 7 different lineages among the human-biters. That all ancestral bedbugs in the species started out their parasitic lifestyle on bats is suggested by the marked biodiversity of the bat-bugs, compared to the very limited diversity among the human-biters. Thus, once the varieties diverged, they apparently followed very different paths.

The DNA from human-biting bedbugs suggests a lot of inbreeding. Such a “founder effect” occurs when a population descends from a small group of isolated individuals. Genetic diversity is minimized. This “founder effect” is what we would expect if a few ancestral bat-biters sampled available humans where their paths crossed—perhaps in caves—and then reproduced exclusively in the new niches people provided. 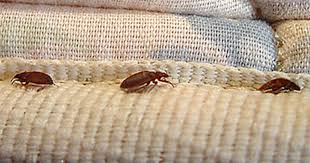 After identification of bedbug bites, skin and infectious transmissible diseases are the 2 main medical concerns of human contact with the bedbugs .

Hosts are usually bitten at night. Because bedbug saliva contains anesthetic compounds, bites are painless and usually not felt until several hours later. Other compounds are also injected: anticoagulant factors (eg, factor-X inhibitor), vasodilatory compounds (such as nitric oxide), and proteolytic enzymes (eg, apyrase), which are all substances that participate in the ensuing local hypersensitivity reactions .

The typical skin lesion is a pruritic erythematous maculopapule, 5 mm to 2 cm in diameter, with a central hemorrhagic crust or vesicle at the bite site, similar to arthropod bites. Atypical forms vary from asymptomatic or pauci-symptomatic to purpuric, vesicular, and bullous lesions. The bedbug-bite distribution frequently follows a line or curve Lesion numbers range from several to many, depending on habitat-infestation intensity, and are preferentially located in unclothed zones. Sometimes, the eruption mimics urticaria Exceptional anemia  or anaphylactic reactions have been reported. Lesions resolve spontaneously within 2–6 weeks, but permanent postinflammatory hyperpigmentation may ensue .

At normal room temperatures (72°F) and with ample feeding opportunity, bed bug nymphs require about a week for development of each instar between molts. Each molt leaves behind exuviae, the “shed skin.” In small infestations, these exuviae can be used to estimate a timeline. This method is limited, but can be useful under the right circumstances. For example, if a fourth instar bug is found alone in a mattress tuft along with some fecal spotting and three graduated exuviae, a reasonable guess would be that it has been using that harborage for at least two to three weeks.

Eggs take about 10 days to hatch at 72°F, so if you find hatched eggs attached to furniture, they’ve been there for at least that long. Newer eggs can be collected, and upon hatching provide an estimation of when they were laid.

Often a great indicator of how long an infestation has been around is the number of adult bed bugs present. Generally it takes at least seven weeks for a bed bug to grow from an egg to an adult, so there should be no new adults from eggs during that period. Therefore, if many adult bugs are present one can reasonably assume that the infestation has been there for more than seven weeks. The assumption here is that the infestation started from only a few bugs and there have not been additional introductions during that time.